Getting your closest friends together for your last weekend as a bachelorette doesn’t take much. Finding the perfect Savannah bachelorette party package that offers relaxing hotels, pampering, partying and exploring can be difficult. Along with Savannah’s history and heritage is a long list of places to band together with your girls and bust through the town. Going from the spa to the hottest party spot, from brunch to the beach, here are some fun bachelorette ideas in Savannah: 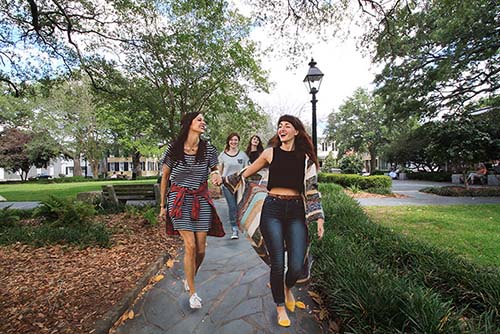 Find the best place to stay for a bachelorette party in Savannah—from a fully-furnished and carefully curator carriage house and trendy five-star hotels in the Historic District to cottages and beach houses Tybee Island.

Bachelorette parties abound in Savannah where the activities and abundant and drinks can be carried around in to-go cups. From down by the river to the heart of the city to far off in the islands, there’s something for every type of adventurer.

Enjoy a boastful brunch at some of the most popular midday meal spots in Savannah, offering anything from warm, home-style breakfast to international avant-garde meals with endless mimosas and freshly squeezed lemonade.

Savannah is no stranger to gourmet cooking and top-notch restaurants with divine dinners and a killer atmosphere. Some spots even offer bars so glamorous that you won’t wait ’til sundown for a sip of something stronger than wine.

What would a bachelorette party in Savannah be without some cool concoctions and colorful cocktails? Head out to some of Savannah’s well-kept secrets. Be it swanky and classy or a downright dive bar, there’s a little liquor for every kind of drinker in your group.

Where to Sing and Dance

Whether you wanna tear up the down with your sweet dance moves or tear up your vocals screaming along to the classics and your long-time favorite songs there’s no doubt you’ll find a stage, a mic or a dance floor to do so.

Nothing like a little R&R with the ladies and a bit of pampering for the bride-to-be. Pick from the many beauty salons, hair salons and massage parlors Savannah has to offer.