What do historic preservation and popsicles have in common? Though they both contain the letter “p,” the answer actually comes from a charming and delicious business ambition: Savannah Square Pops! 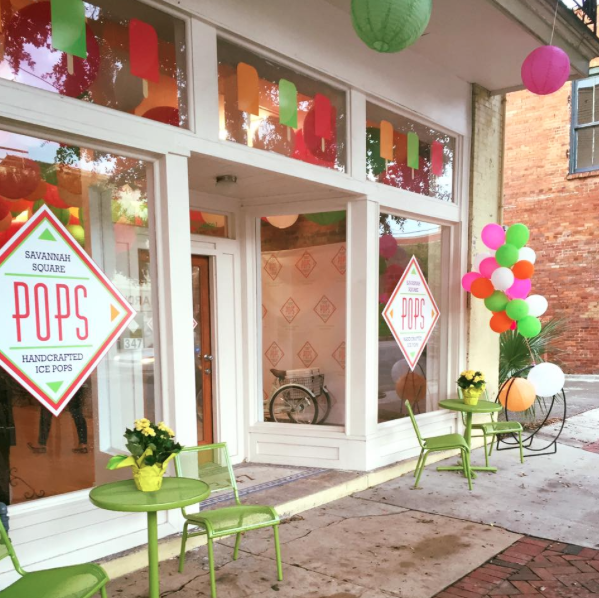 Not unlike Savannah’s notoriety for the quirky and trendy, Savannah Square Pops celebrates the sweetness of the city’s history by translating some of its landmarks into popsicle flavors.

Savannah Square Pops (or SSP) opened up their first shop at 347 Martin Luther King, Jr. Boulevard, where they sell 22 unique and homemade flavors of popsicles, each one named for the city’s signature squares. Flavors include the Chippewa Square Pop, which tastes like blueberry basil, and the Pulaski Square Pop, which combines chocolate and pretzel with salted caramel.

Tara Travers Hart, the SSP director of marketing and one of the shop’s three owners, said that SSP’s mission is to support the preservation of Savannah’s beautiful squares through the sale of SSP’s pops.

“We plan on donating to a preservation society to help revitalize and keep these historic squares pristine,” Hart said.

Hart graduated with a degree in marketing from Georgia Southern University. He described the inception of Savannah Square Pops as one full of potential in a market of possibilities.

“The idea for SSP came from my partner, Royce Patrick, who moved here from Birmingham, Alabama,” Hart said. “Royce is the owner of two additional restaurants in the area, and realized the potential for a gourmet ice pop store in the city of Savannah. With its booming tourism industry and Savannah’s trendy food scene, he recognized that our handcrafted ice pops would bring the perfect flare to our city.”

Patrick then partnered with his close friend, Judd Wiggins, who was practicing law in Birmingham. Wiggins was also intrigued with the ice pop idea and believed he could be involved in making this business a success. “After approaching me and asking my thoughts on the business, I immediately signed on as an owner and jumped into the marketing aspect,” Hart said.

When it came to choosing their first location, the SSP team had to take into consideration a number of factors.

Their new location on was perfect, because it held a wealth of Savannah history. Despite a slow recovery from economic downturn, Hart and her team feel confident that new businesses are “moving in sooner rather than later.”

“The area we chose is on the cusp of revitalization, and we are so excited to be one of the first to premiere our business,” Hart said. “We do plan on opening other stores in and around the Lowcountry when the time is right.”

They also ask for the public’s opinion on what they would like to see at SSP, a successful method that has generated a huge response.

The playful quality of SSP’s brand makes it a wonderful catering option for parties or other events in need of a winning sweet treat. “We would love to be involved in your child’s birthday party, whether it be at our shop, or delivered to your party venue,” Hart said. “We also strive to make signature pops for weddings, bridal showers, or other special events. You choose the flavor, or we can pick them; It’s that easy!”

“It’s COOL to be square,” is SSP’s slogan. Hart and her team truly believe this motto. “We want Savannah Square Pops to be an experience for all ages. Just like the days when you were a kid being handed your favorite special treat and the utter joy it brought.”

Hart and her SSP crew’s current goal is for customers of all ages to walk into their bright, colorful shop and instantly feel like a child again. “Remembering how excited you were when your parents took you out for a special treat…that’s what we aim to capture, that feeling of pure glee.”

For more information, call Savannah Square Pops at (912) 999-7078 or go to savannahsquarepops.com.