Troup Square may be one of the smaller squares, but it is not a drop less brilliant. 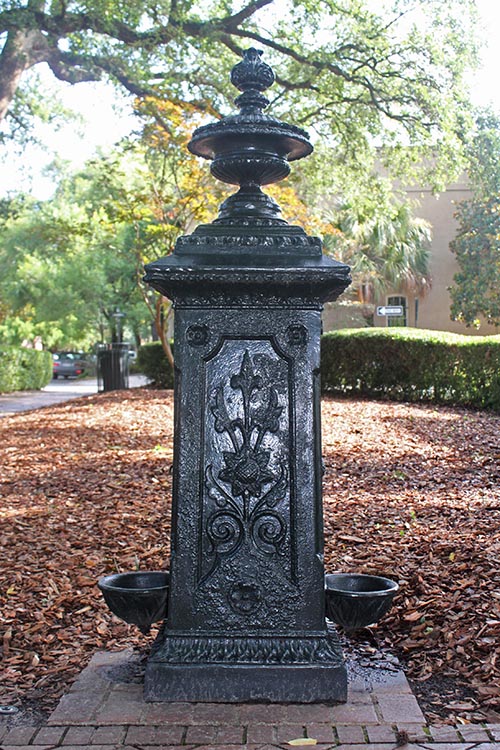 Troup Square is one of the most fascinating monuments of all the squares in Savannah. And it’s the perfect place to take your furry friend for a walk, because there’s a fountain just there for them!

Established in 1851, it was named in honor of George McIntosh Troup, an United States Senator and Governor of Georgia. In the middle of the square is the fascinating Armillary Sphere, a sphere held up by six tortoises. Originally invented by the Greeks and used to track celestial orbits, armillary spheres were also used by ancient astronomers to show the recurrence of equinoxes and solstices. This Armillary Sphere statue was designed in 1968 with zodiac signs around the sphere and functions as a sundial.

Also on the square is the Myers Drinking Fountain.

The fountain is a reproduction from the original bronze fountain that was presented to the city by Mayor Herman Meyers in 1897. It was initially placed in Forsyth Park, but moved later. The faucets and basins were originally four feet off the ground, but in the reproduction, they were moved to the ground so now thirsty dogs can get a drink.

The square is the old site of the Unitarian Universalist Church(at 321 Habersham Street).

It is said that during Reverend James L. Pierpont’s time at the church that he composed the popular Christmas tune “Jingle Bells.”

Because of their abolitionist beliefs, the church was forced to close before the start of the Civil War, which halted development, causing there to be a break in building. This is why several of the surrounding rowhouses were built after 1870. It wasn’t until 1997 that Unitarians regained the church.