The 14-room, three-story Guest House which is located across the street on York was built in 1875. Emitting an aura of antebellum air and history, the charming and intimate 17Hundred90 Inn & Restaurant dates back to (you guessed it) 1790, when building’s ground level was erected. Most of the original building was destroyed in the Fire of 1820, but the three residencies which became the inn and restaurant were completed in the 19th century, with the hotel’s first two buildings constructed between 1821 and 1823 and the third in 1888. 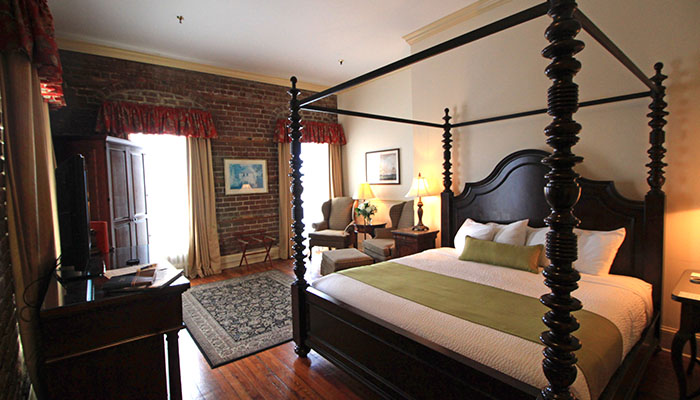 Savannah’s visitors stay in an original cotton warehouse. They may also experience some seriously spooky encounters within their 200-year-old guest rooms. The River Street Inn, located on East Bay Street just steps from River Street, features five floors of guest accommodations. It is the city’s only member of Historic Hotels of America.

During the early part of the 19th century, Savannah was the second-largest cotton seaport in the world. Its original two floors housed the cotton that moved through the port. The hotel expanded its original layout of 44 guest rooms to 86 in 1998. 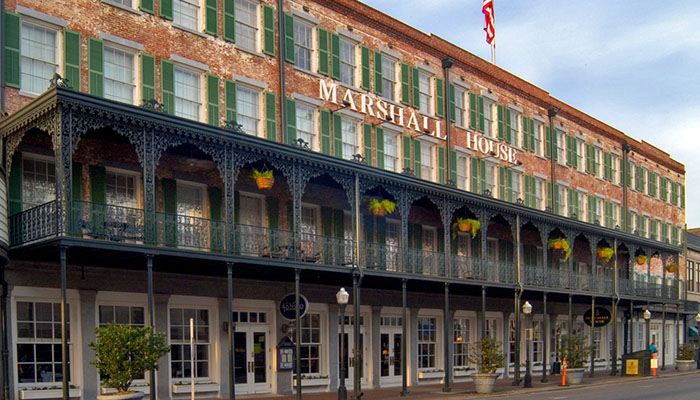 In 1864-65, The Marshall House was occupied by Union troops and was used as a Union hospital. Historic photographs and documents are displayed throughout the hotel. If you get a kick out of Savannah’s supernatural vibe, you’ll have fun with the haunted reputation.

The Marshall House is located on Broughton Street in the very center of the Historic District. There’s shopping and dining right outside our door, and beautiful squares and antebellum architecture at every turn. Most guests do not need their car until it’s time to leave.

The Gastonian is one of Savannah’s most elegant and grand mansions on Gaston Street. Voted #9 Hotel for Romance and #20 Small Hotel in the United States by TripAdvisor in 2022.

Each of the 17 rooms at The Gastonian features comfortable beds, private bathrooms, and sitting areas. Details range from brilliant chandeliers and clawfoot tubs to private balconies and spacious tall ceilings. Each has a working fireplace for winter romance, and comfortable robes for year-around relaxing.

The Gastonian is located two blocks from Forsyth Park and within easy walking distance to a number of city squares. It’s a five-minute walk down Lincoln Street to Colonial Park Cemetery, and from there, just a few blocks to the Juliet Gordon Low Birthplace. Gaston Street boasts lots of photo opportunities of elegantly restored homes and gated gardens.

An oval-shaped blue sign signals Savannah’s guests to the Eliza Thompson House at 5 W. Jones St. Built in 1847 for Eliza and Joseph Thompson and their seven children, this converted private home saw many a party and extravagant celebration in its heyday as the first houses constructed on the now-iconic Jones Street. A second section was added to the original structure around 1870, which consisted of what is currently the front parlor, the Chatham room and the J. Stephens room. Today, the home is a popular Savannah bed and breakfast with just the right amount of spirited spooks and ghostly narratives. 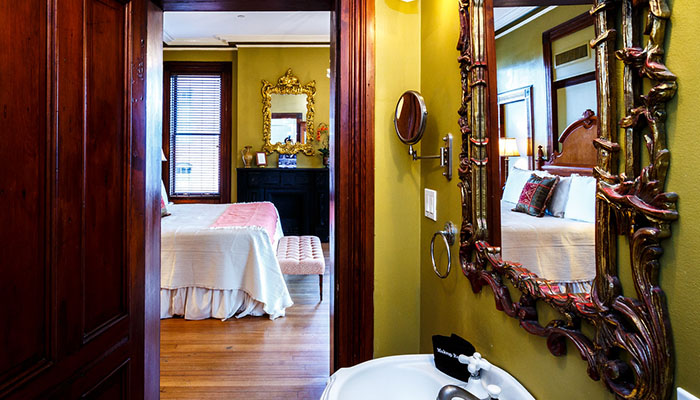 Situated at 123 Habersham St. on Columbia Square, the Kehoe House is an elegantly restored 1892 Renaissance Revival mansion. William Kehoe and his family gave their name to the inn. The house’s services varied from a boarding house to a funeral parlor. New York Jets football star, Joe Namath even owned the inn until 1990.

Down on Factors Walk is the Olde Harbour Inn, recognizable by its magenta awnings and maroon shutters. This boutique hotel marries a modern flare with its historic roots, dating back to 1812 when the site was first consisted of wharf warehouses and storage buildings. Savannah’s own Johnson and Jones families were the primary owners of the properties