The best time to see Savannah’s azaleas in all of their glory is March and April. 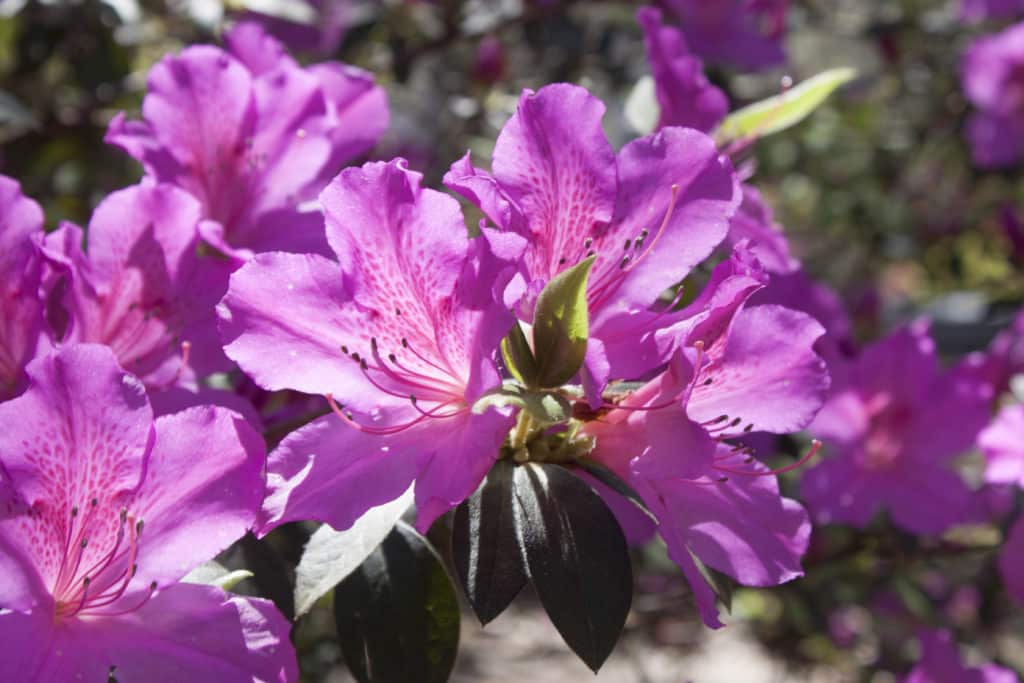 North American azaleas are flowering shrubs in the genus Rhododendron, section Pentanthera, subsection Pentanthera, so named because they all have five stamens. North American azaleas are deciduous and produce two types of buds. One is a larger and produces about 20 flowers while the other bud produces a leafy shoot. The flower color, fragrance, and number of stamens vary among species.

Rhododendron alabamense is found most commonly in Alabama. It can also be found in southern Tennessee, east Georgia, the panhandle of Florida, and eastern Mississippi. This is not a common species, despite its range. It can be found in moist places that are sandy and flat. It is also found in steep, dry areas, like bluffs. The flowers can smell musky or sweet, and lemony. The flowers are white, white with a yellow patch, or light pink. They are sticky due to glandular and non-glandular hairs on the floral tubes. The leaves are dull to slightly glossy, and dark to medium green. The flowers are produced from April into early June.

Rhododendron atlanticum, the dwarf azalea, grows on the coastal plain from Georgia to Delaware. It can be found up to 200 miles away from the coast, if the region is sandy, swampy, or dry. These plants can spread by rhizomes if the soil is loose. The flowers can be white or a light pink color, and are fragrant. The flower tubes are the same colors, and are glandular. The pinkish red glands form a line onto each petal tip. Leaf color ranges from gray-green to blue-green. Dwarf azaleas are commonly less than two feet tall. They bloom in the months April and May.

Rhododendron austrinum is also called the Florida azalea. It is closely related to R. canescens, and it can be difficult to tell the two apart. Rhododendron austrinum is found in the panhandle of Florida, and the southern regions of Georgia, Alabama, and Mississippi. It has become a popular species in North America because it is easy to grow, is very colorful, and also early to bloom. The flowers range between yellow, orange, and gold. The tubes are a pink/red. The pink color may be a hybrid between this azalea and R. canescens. The stems, leaves, and tubes are glandular. They can grow up to 15 feet and grow well in the sand, and heat. They bloom from March to April.

Rhododendron flammeum, also known as the Oconee azalea after the river in Georgia where was first discovered. Growing in the form of a shrub in dry woods, on slopes, ridges and stream bluffs, the Oconee blooms in the spring.

Rhododendron occidentale flowers in spring and summer, with a wide range of flower colors. It grows in moist areas near streams, wooded areas, bogs, bottoms of canyons, thickets, and ocean bluffs. Flower color ranges between white, pink, and salmon. The color blotches on the petal range from yellow to orange most commonly.

Growing in the form of a shrub, the flowers range in color from white to pink, with no blotches of color on the upper petal. This azalea blooms in the spring in moist wooded areas along streams, thickets, and swamps.

Rhododendron viscosum is also known as the swamp azalea, catch-fly azalea (due to sticky and glandular hairs), and clammy azalea. Its large land area includes growth on the coastal area of Mississippi, and along the east coast from Florida to Maine. As swamp azalea implies, it prefers damp areas. Leaf shape and color vary greatly; from a bland grey-green, to a blue green, and from small and narrow and small to round and large. The texture of the leaf can be smooth, or rough. The flowers are usually white and fragrant.