The Tybee Lighthouse on Tybee Island is the oldest and tallest lighthouse in Georgia. 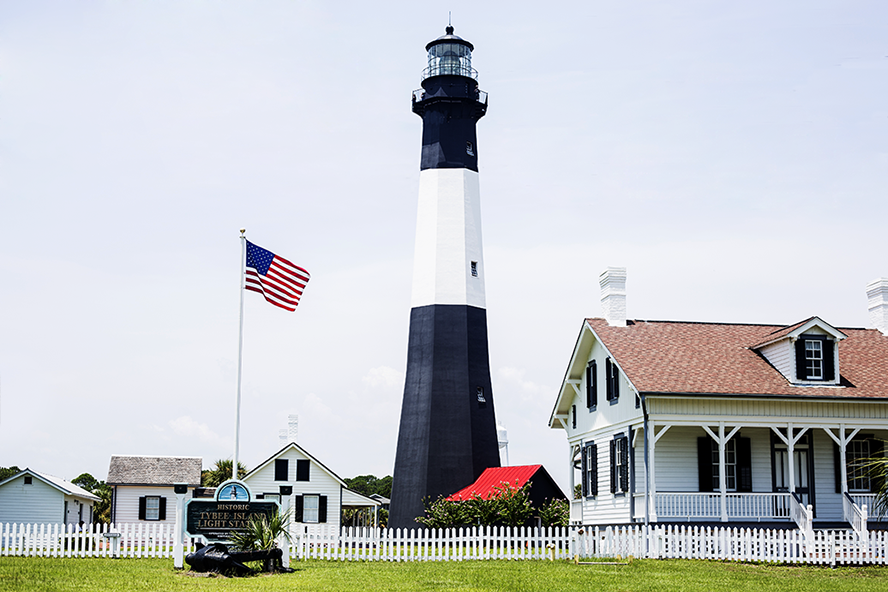 The bottom 60 feet of the Tybee Island Lighthouse date back to 1773. The Lighthouse added and additional 94 feet in 1867. The walls of the tower are over 12 feet thick at the base. They taper to approximately 18 inches at the top.

At the top of the tower is the original Fresnel lens. This lens magnifies the 30,000 candle-power light. It is nearly eight feet tall and can is visible 18 miles out to sea. This lens is the Tybee Light. To the community of this tiny coastal town, it is a shining reflection of their lives. It is part of their past, present and future.

When James Oglethorpe established the first colony on Tybee, he realized that the survival of the colony was dependent on the safe passage of ships that carried settlers and supplies through the treacherous shoals along the Savannah River. As a result, the first Tybee light, a small beacon, was built on the island in 1736.

Today the survival of Tybee’s local community is dependent upon historic preservation and tourism.

Thanks to the foresight and initiative of Fort Pulaski’s Superintendent, Dan Brown, the Tybee Island Lighthouse was officially opened to the public on June 29, 1985.

One hundred and seventy-eight steps lead to the Lighthouse’s breathtaking observation deck, located 154 feet above the ground. From the deck, one views the panorama of the Lowcountry. The view shows “the length and breadth of the marshes,” as described in Sidney Lanier’s poem, “The Marshes of Glynn.”

The Tybee Light is formidable and overwhelming when one faces it head on. It is a prism-like glass lens, where two large bulbs stand supported in bronze.

According to log books and the fond recollections of his son Henry, George B. Jackson was the last Tybee Lighthouse keeper from 1928 until his death in 1948.