If you’re looking for a taste of Britain in the heart of Savannah, don’t miss Six Pence Pub. 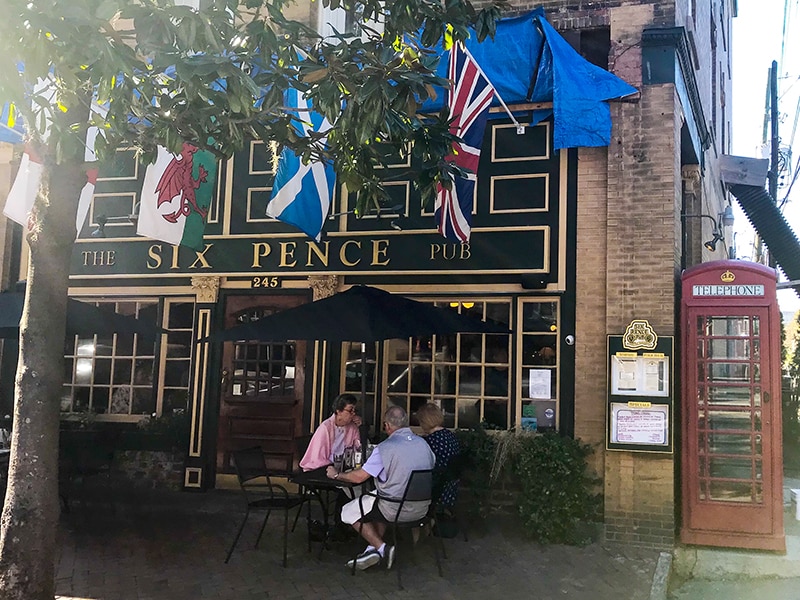 The city’s most authentic and friendliest British pub serves up an ideal combination of beer and cider on tap from the United Kingdom, plus homemade favorites from “across the pond,” like shepherd’s pie, Scotch eggs, Beef Guinness and bangers and mash.

Conveniently located on Bull Street, just steps away from Liberty Street in the heart of Savannah’s National Landmark Historic District, this British gem offers indoor and outdoor seating and a full menu, served until midnight. Six Pence Pub delights visitors from near and far with outstanding British-inspired food and drink. Savannah’s original and most authentic British pub proudly offers the best of the U.K. in Georgia’s First City.

Or choose the sidewalk dining for a perfect place to “people watch,” while sampling a variety of appetizers, traditional American and British comfort foods. The sidewalk tables serve as an ideal place to enjoy a pint and a meal al fresco — plus it’s a great place to bring your canine friends!

The full bar, which offers an impressive array of imported beer, wine and liquor, is open daily, with Happy Hour from 5 to 7 p.m. Stop by for a pint of Guinness, a glass of hard cider or the best martinis in Savannah! Settle into the pub’s cozy interior for a delicious lunch or dinner. Add a favorite craft or seasonal beer on tap to your meal and enjoy!

Six Pence features an expanded beer, wine and liquor selection, and a menu of traditional English and American comfort foods.

With its classic pub décor and delicious menu, Six Pence is often called the “Most Authentic English Pub in Georgia.”

Six Pence has been featured in the pages of Southern Living. It served as a key location in the Julia Roberts movie, Something to Talk About. It remains a popular downtown Savannah hangout for locals and visitors alike. Look for the Union Jack flying out front and the old-fashioned red telephone booth on the sidewalk outside. You’ll discover the best of England in Savannah.

This popular dining destination offers a full menu throughout the day and into the late night. If you’re looking for a fun, welcoming place to relax with friends over a pint or some traditional American and British food, stop by the Six Pence Pub. Don’t miss all the fun!

Six Pence Pub is open daily at 11 a.m. A full menu served until midnight. The bar open until late.