The Savannah Theatre, first opened in 1818 and located on Chippewa Square in Savannah. 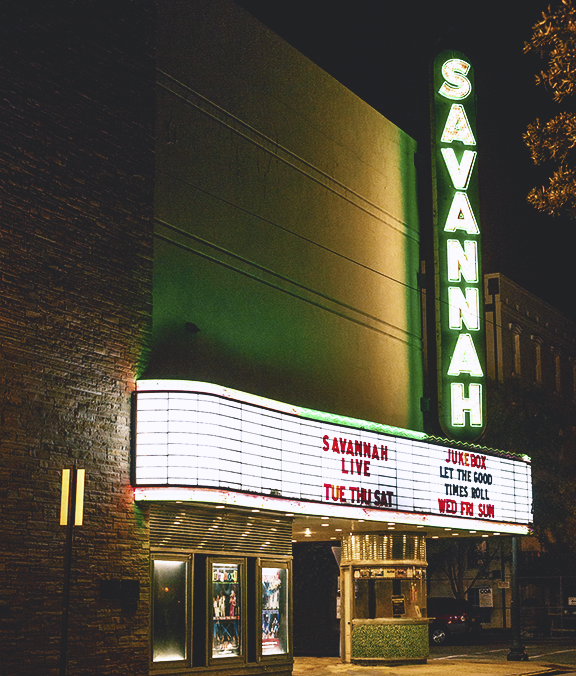 It is one of the United States’ oldest continually-operating theatres. The structure has been both a live performance venue and a movie theater. Since 2002, the theatre has hosted regular performances of a variety of shows, primarily music revues.

The Savannah Theatre opened its doors at 5:30 p.m. on December 4, 1818 with a performance of “The Soldier’s Daughter”. British architect William Jay designed the original structure. His other notable works include the Telfair Mansion and the Owens-Thomas House, both located in Savannah. During the 1850s and 1860s, it was sometimes known as the Athenaeum. On March 21, 1861, Alexander H. Stephens delivered the Cornerstone Speech at the theatre.

The image here is the 1906 remodel which resulted in a new brick facade, with cast terra cotta panels. The original structure suffered severe damage due to a hurricane that hit Savannah on August 31, 1898, tearing sections of the roof off the building and flooding the auditorium. Additionally, the Theatre underwent two notable structural overhauls as the result of fires in 1906 and 1948. Following the 1948 fire, the building transformed to its current Art Deco style.

Over the past two centuries, the Savannah Theatre has showcased an array of talented performers, including Fanny Davenport, E. H. Sothern, Julia Marlowe, Otis Skinner, Oscar Wilde, Sarah Bernhardt, W. C. Fields, Tyrone Power, and Lillian Russell. Edwin Booth played several engagements at the Theatre in February 1876, with Shakespearean roles including Hamlet, Iago, and King Lear.[9] It is unknown as to whether or not Edwin’s younger brother John Wilkes Booth ever performed at the Savannah Theatre.

In 1851, the New York Dramatic Company leased the Theatre briefly. Among the players was Joseph Jefferson, whose most well-known role was that of Washington Irving’s “Rip Van Winkle”. However the company’s stand failed to succeed, as their “lineup of standard hits failed to tempt Savannah audiences.”[10]

One of the more memorable performances in the Theatre’s history came in November 1911, when baseball great Ty Cobb appeared in The College Widow.

The Savannah Theatre was temporarily closed due to Covid, but is now open with safety precautions in place.

Take a journey through the decades of timeless music as the international singing group, LEGACY pays tribute to some of the most iconic legends of all time. From The Beatles to Bruno Mars and The Four Seasons to Earth Wind & Fire, this show is jam packed with hits leaving you dancing in the audience!

This talented group of singers previously performed in lead roles in hit broadway shows such as Hamilton, Wicked, Jersey Boys, Motown The Musical, In The Heights and Hairspray!