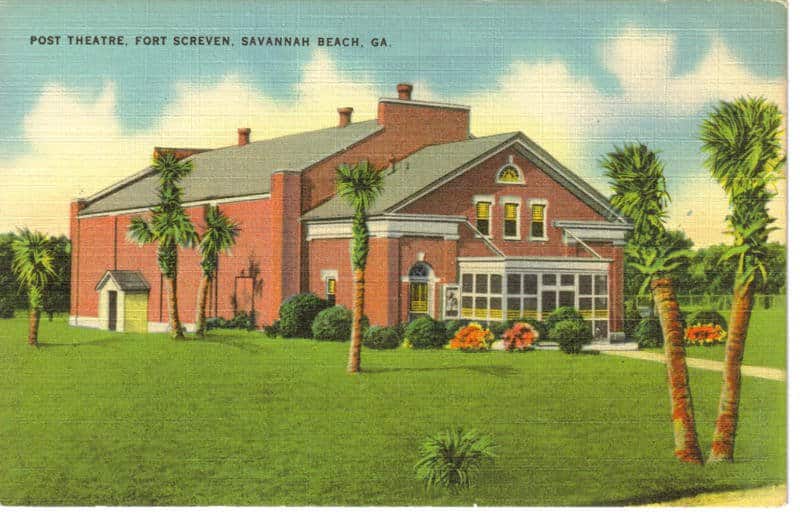 The military for the local fort Fort Screven constructed the theater in 1930. Following the Second World War, the military abandoned it. After laying dormant for 40 years, the Friends of Tybee Theatre revitalized it. Today it is alive and well. The Tybee Post Theater is one of the few buildings that Fort Screven and U.S. Army opened to the public.

The Post Theatre was one of the first theaters in Georgia to have sound features, called soundies.

These soundies became the highlight of recreational activities for the local Fort Screven. Because the theater was built by the Army, the blueprints for the theater were one of several standardized designs. The Post Theater has a Greek Revival style facade and is similar in design to theaters at Fort Benning, Georgia and Fort Hancock, New Jersey. The interior was originally Streamline Moderne.

After Fort Screven was decommissioned, the Post Theater was sold to private owners and became the Beach Theater.

From the 1940s through the 1960s locals and tourists alike enjoyed movies at the beach. The end of the sixties brought an end to the theatre. For a brief time it served as a sail loft. Later plans for the development of condominiums gutted the structure. The building then stood vacant and open to the elements for over 20 years. In 2006, the Friends of the Tybee Theater purchased the theater. The Friends of the Tybee Theater is a 501 C-3 non-profit, volunteer-run corporation.

Acombination of private and government funds, completed the restoration plan. Phase 1 of restoration, provided a new roof and securing of the building in 2009. The Tybee Post Theater was the first Georgia project to receive a grant funded by specialized license plates. The $20,000 so garnered added to replacing the theater’s doors and windows. The now named Tybee Post Theater is the cultural arts center for Tybee Island and the surrounding community featuring all types of live entertainment, movies and arts activities.