Telfair Museums has hired an accomplished art-world veteran as its new chief curator and director of curatorial affairs. 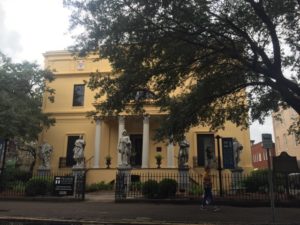 Crawford Alexander Mann III will join Telfair in November 2021 from the Smithsonian American Art Museum in Washington, D.C. There, he curated prints and drawings since 2017. At the Smithsonian, Mann has organized world-class exhibitions including the major upcoming survey Sargent, Whistler, and Venetian Glass: American Artists and the Magic of Murano. Before the Smithsonian, he served as the Joan and Macon Brock Curator of American Art at the Chrysler Museum of Art in Norfolk, Virginia, and as the Andrew W. Mellon Fellow at the Rhode Island School of Design Museum in Providence, Rhode Island.

He authored numerous exhibition catalogs and scholarly publications, lectured internationally. His many fellowships include those from the Smithsonian Institution, the Metropolitan Museum of Art, the U.S. Capitol Historical Society, and the Terra Foundation for American Art.

His research interests include:

“We continue to attract top talent as one of the South’s leading art museums, said Ben Simons,  CEO/executive director.

“His impressive experience at major institutions, his love of art and history, and his wide-ranging expertise in American art will make us even stronger as we shape our vision for the future. He’s an incredible talent and also a delightful person with inspiring intellectual range and a passion for public engagement with art.”

“It will be a privilege to lead this team of curators, educators, and interpreters in celebrating these treasures. I also look forward to hunting for unexplored stories and filling gaps in our collections and programs. Together we will ensure that Telfair is central to Savannah’s reputation as the creativity capital of the American South.”

Opened in 1886, Telfair Museums is the oldest public art museum in the South. It features a world-class art collection in the heart of Savannah’s National Historic Landmark District. The museum encompasses three sites. These are the Jepson Center for the Arts, the Owens-Thomas House & Slave Quarters, and the Telfair Academy. For more information visit telfair.org.