The Savannah Coffee Roasters may still be the new coffee shop on the block, but that hasn’t stopped them from keeping up with the rest of the restaurants and cafes.

With new foods constantly being added to the menu and chefs perfecting existing recipes, this café is taking strides to get in the lead. And with all of the plans they have brewing this fall, and a little help from sightseeing tours that stop by the shop, they might just make it there. 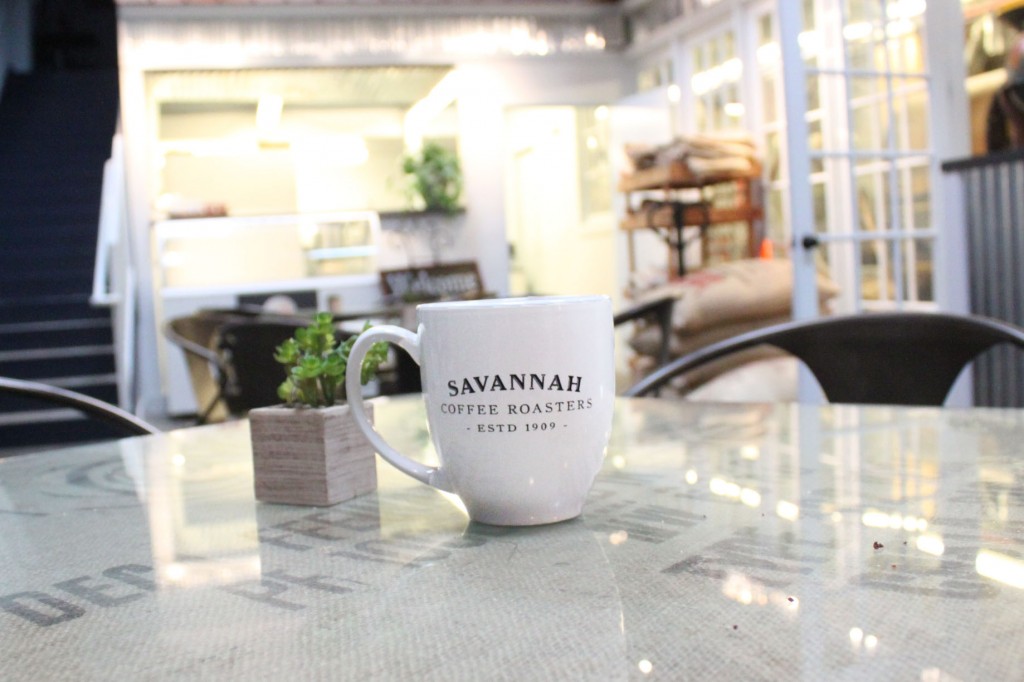 “We’re about to open our wine bar,” said Owner Lori Collins, a marketer turned chef from Brisbane, Australia. “That’ll happen in the next couple weeks.”

This new wine bar will offer customers a variety of wine and specialty craft brews. Upon obtaining their wine and beer license, the café started serving beers with their expanded lunch and dinner menus, and soon they hope to add beers from local breweries to their menu, as well as a nice selection of wine.

“Wine has to be nice to drink by the glass, but it’s also important that it matches the sort of food you’re eating and often people don’t know how to do that,” said Lori. “So we’d very much like to take an information route.”

They hope to help customers learn about the different kinds of wine and how to pair them with different foods they offer, many of which are made by their Executive Chef Susan Goodman, who was the last to train under Julia Child.

It’s her expertise paired with Lori’s, along with their pastry chef and baker Jacqueline DeBorger’s from New York, that makes the delightful fare from the kitchen possible.

Amid a constantly growing menu, Chef Jacque is in the process of perfecting a recipe for the organic ice cream they’ll soon sell.

“It’ll be 100 percent organic with organic cream, milk and eggs from local farms,” said Lori. “We’ll also do gelato as well as sorbet and it will be available in to-go cups as well as a pints.”

In addition to these sweet treats, they’ve also added several entrees, including burgers and tuna sliders to the menu.

“We have a beautiful turkey burger,” said Lori. “The turkey patty has cherries and green onions in it – it’s very delicious – and we serve that with an apple salad that has the apple vinaigrette in it.”

Other dining options include their Paninis and the Liberty 215, a lightly breaded chicken breast served on a brioche bun with peperoni and fresh mozzarella. But it’s the quiches and croissants that their customers love the most.

“They definitely come here for our croissants,” she said.

They also offer a variety of other sweet treats, from brownies and macaroons to chocolate ganache cheesecake and tiramisu. 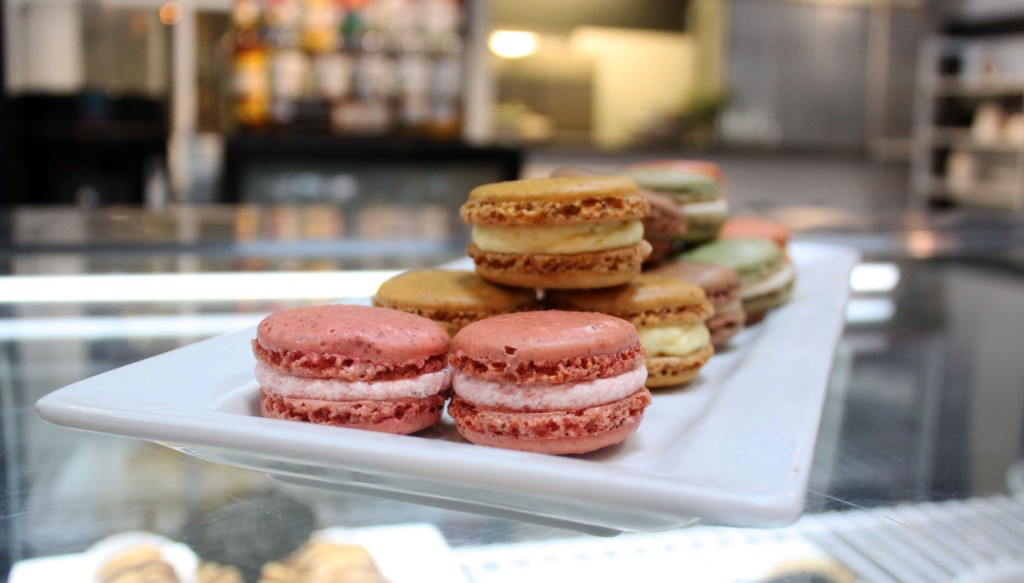 But what about their brews?

The café offers all kinds of caffeine-laced drinks, including an Americano and French Press coffee as well as lattes, cappuccinos, four different types of mochas (and hot chocolates) and most of these on ice. Customer favorites include the Savannah Iced and their Captains Choice brew.

It was their roasted brews that attracted Lori to coffee in the first place. After being a longtime fan of their coffee, she bought the coffee-roasting company from Hayden Banks in December, while in search for a shop to open up a café.

Edgar R. Morrison established the Savannah Coffee Company in 1909 on Bay Street first but it wasn’t until Banks took over that the company, which changed its name to the Savannah Coffee Roasters, that they opened their first store in the 1980s in Oglethorpe Mall.

Today, they still roast their own coffee and guests can even get a peek into their roastery, located right inside the café.

“Because we roast the coffee, we wanted to make sure we had a really good experience with our customers with great coffee, great food and a great environment,” said Lori.

And they’ve got it. After months of renovations to a space that had been vacant for eight years, Lori’s crew created a café and roastery that felt homey upon entering and spacious once inside. 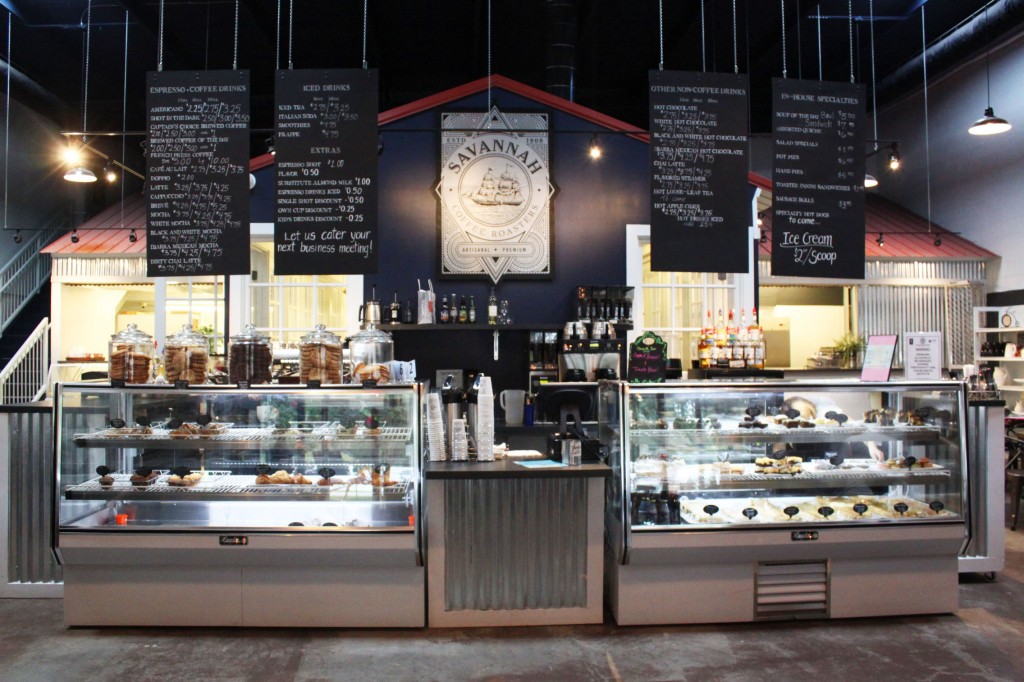 And it’s in this great space that the café holds all kinds of events, from their Open Mic Nights to their new Saturday night dinner shows, Iced at the Coffee Shop, a family-friendly murder mystery series by Odd Lot Productions, where customers get to watch a show and try to solve a case. Customers can also do a little shopping, grabbing Savannah Coffee Roasters cups, coffee, honeys, syrups, coffee makers and several other items.

They also have two private meeting rooms – one that holds 50 people and another that can hold up to 100 people – and a bride and groom has even booked the café for a wedding reception.

“I think ours is a very sophisticated space,” said Lori pointing to the front wall, where they plan on adding a fireplace. “A lot of people have said this is like sitting in the living room, and we like people to feel like it’s an extension of their home.”

A home where, Lori said, they have met some of the nicest people and made wonderful friendships.