Unsettling stories of surround homes and historic squares all around Georgia’s First City.

Though much of the landscape has changed, a few things have not. Some say these things are spirits who won’t leave their places of tragedy, while other still say it’s just people’s minds playing tricks on them. Find out for yourself and take a ghost tour to visit these supposedly haunted squares of Savannah. 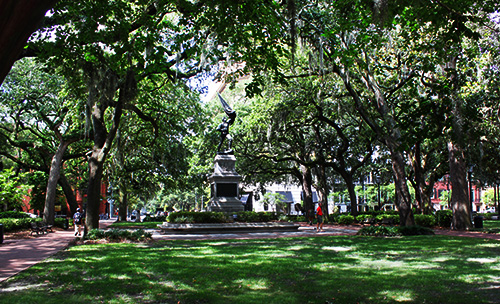 Just beyond Madison Square is the ground on which many lives were lost fighting during the Battle of Savannah. Before it was named after President James Madison, rumors of spirits and reports of paranormal activity surfaced. Some say there was a mass grave for dead soldiers in this very location, though there is no confirmation. Anchored by the statue of William Jasper, the square’s most common ghost has an eerie resemblance to the monument—a solid black shadow the shape of a full-grown man.

Perhaps even more unnerving is the fact that the Sorrel-Weed House—a home where Matilda Sorrel supposedly committed suicide and has been investigated by Ghost Hunters and featured on HGTV’s “If Walls Could Talk” and Travel Channel’s “The Most Terrifying Places in America”—opens to the square. Not to mention the Green-Meldrim House, which was General Sherman’s Headquarters during the Civil War. 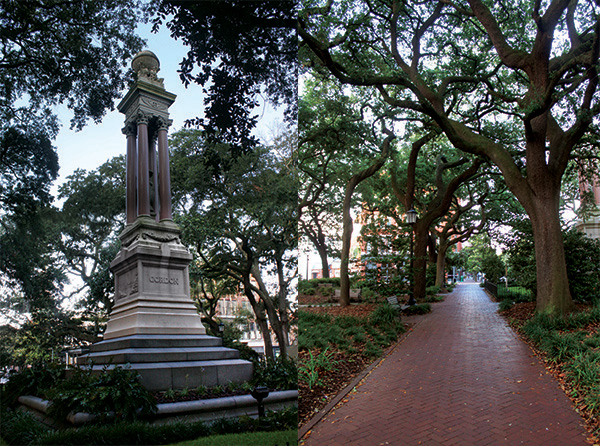 Today Wright Square — perhaps the most well-known of the haunted squares — may be a beautifully shaded section of land, where guests learn a little history and enjoy snacks from one of the nearby cafes, but it wasn’t always a place people wanted to go. One of the original squares of Savannah, this site was once held gallows where many lives were taken.

Memorialized in Wright Square, Yamacraw Chief Tomo-Chi-Chi was buried here in 1739, but 100 years later, his grave was desecrated by the city to make way for a monument to William Washington Gordon, a prominent politician and president of the Central Railroad and Banking Company. Does it come as a surprise that Tomo-Chi-Chi has still been spotted centuries later?

However, Alice Riley is the most widely known ghost of Wright Square.

She was the first woman hanged in Georgia for committing the first murder in the colony along with Richard White, a man widely considered Alice Riley’s common law husband. Together, they left Ireland for a fresh start in the New World and arrived in the fall of 1733. They both worked as indentured servants for William Wise, an unpopular cattle farmer with an unsavory reputation. Many accounts say Alice was tasked with bathing William Wise and combing the knots from his hair.

Some mention Wise making lewd comments toward her. On March 1, 1734, Riley and White strangled Wise with a neckerchief and drowned him in a bucket of water. After which, she dumped his body in the Savannah River. However, Wise’s body did not float downriver as expected. He ended up drifting and washed up on the other side of the river. Shortly after his body was discovered, Riley and White were captured sentenced to death.

Alice Riley was able to postpone her execution due to her pregnancy. She was hanged on January 19, 1735 after giving birth. Her child, a son named James, died two weeks later. Richard White escaped prison and was later caught and hanged. Sightings of a pale, redheaded woman begging for help finding her baby are common in Wright Square.

The yellow fever wasn’t the only disease that plagued the people in the early days of Savannah. Right off Reynolds Square, there was supposedly a property that was used for the malaria patients. This hospital included a makeshift crematorium. Legend says that victims of the disease were wrapped in sheets and were burned to prevent the disease from spreading. Supposedly, this took place right in the middle of what is now the square.  Perhaps that’s why when visitors photograph John Wesley’s monument, strange apparitions and spots show up in the photos.

The apparition of James Habersham Jr. has also been spotted at The Olde Pink House, which opens to the square. His grandson, who likes to order a beer at the basement bar, appears from time to time. (Be careful in the basement, because slave children have been known to play tricks on people down there.) 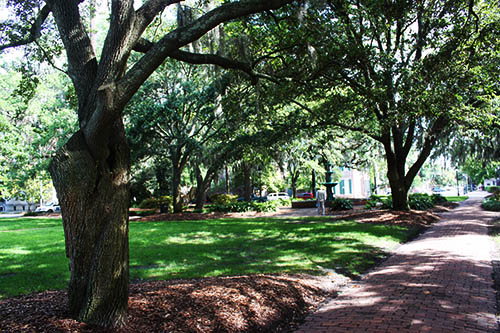 Wright Square is only one of the many haunted squares with spirits occupying the homes on its borders. Where Abercorn Street meets East Macon Street, guests will find both the Andrew Low House and Hamilton-Turner Inn. The structures open into Lafayette Square. Tragedy may not have struck the square, but the unsettling stories of the area.

Known for its magnificent, the Hamilton-Turner Inn was built in 1873 for Samuel Pugh Hamilton. Hamilton was the mayor of Savannah who was also a jeweler and collector of artwork. His home became somewhat of a private art museum. Rumors say he took extraordinary measures to protect it, even hiring a guard to stand watch on the roof with a rifle. The story goes that one night his guard was found dead. With no one willing to replace him, some say that Hamilton went up there to keep watch. Coincidence or not, Hamilton soon developed a sickness and died in 1899. Whether the home is cursed is up for debate, but who is the cigar-smoking man on the rooftop so many have seen?

Just across the street, the Andrew Low House holds its own host of ghosts.

There is the friendly spirit of Tom the butler whose footsteps are often heard. Juliette Gordon Low’s spirit,“The Lady on the Bed,” is rumored to be lying on her deathbed. The paranormal activity is high in this house-museum. Reports often surface of cold spots and areas with an aroma of a sweet perfume. The rocking chair on display in an upstairs room has even been seen rocking on its own.

Many accounts say there’s an older gentleman dressed in a suit and hat that frequents the home. The man has an uncanny resemblance to General Robert E. Lee, who was known to be a close friend of Andrew Low. 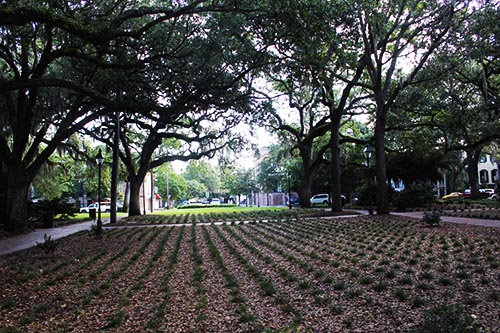 Five blocks south, Calhoun Square is host to a set of spirited abodes. Rumors and legends abound at 432 Abercorn Street. From a daughter who died of heat stroke and dehydration after her father tied to a chair and left her for days to a family with four daughters who went out and returned to find three of the girls dead. Reports of pounding, crying and even giggling have surfaced, as well as an overwhelming chill in the air near this dilapidated building.

Other rumors surround that of Wesley Espy, the son of a federal judge. Wesley fell to his death from a porch at the Epsy family home. It is said that Wesley’s father, a man who was known for his bad temper, was involved with bootleggers and his son, a deacon at the Wesley Monumental United Methodist Church, began to date someone in the congregation who just so happened to be a involved with one of the bootleggers. Perhaps it was retaliation or a father trying to stop his son that ended badly. One thing is known—his father was never charged or even investigated.

But it’s not just the homes that hold the haunting history.

In the early 2000s, workers dug up bones when demolishing a sidewalk in front of the Massie Heritage Center. From construction site to crime scene, the remains were analyzed and found to be that of African-American slaves who were buried 200 years prior.