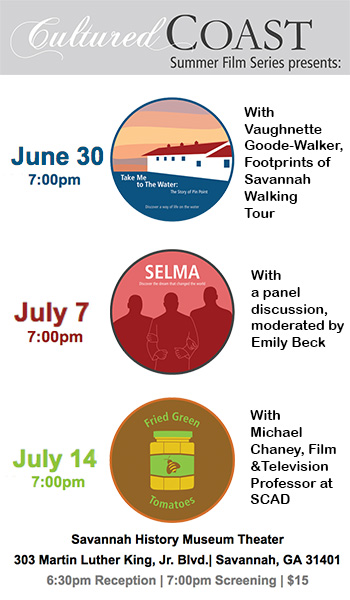 Coastal Heritage Society will host their first Summer Film Series each Thursday, June 30-July 14, 2016 at 7 p.m. at Savannah History Museum, 303 Martin Luther King Jr. The series will tackle some prevailing 20th century themes and conflicts and recognize the growth and prominence of filmmaking in Georgia, beginning in the 1990s through today.

June 30 • “Take me to the Water” (2011) with a panel discussion with residents of Pin Point to follow, moderated by CHS’s Manager of Interpretation Emily Beck

July 7 • “Selma” (2014) with an introduction by Vaughnette Goode-Walker, historian and founder of the Footprints of Savannah Walking Tour

July 14 • “Fried Green Tomatoes” (1991) with an introduction by Michael Chaney, Film and Television Professor at SCAD

Each film will begin with a reception at 6:30 p.m. with themed appetizers, a cash bar and a signature cocktail for the evening. This event is open to the general public and tickets are $15 per person. Pre-registration is required at chsgeorgia.org/films