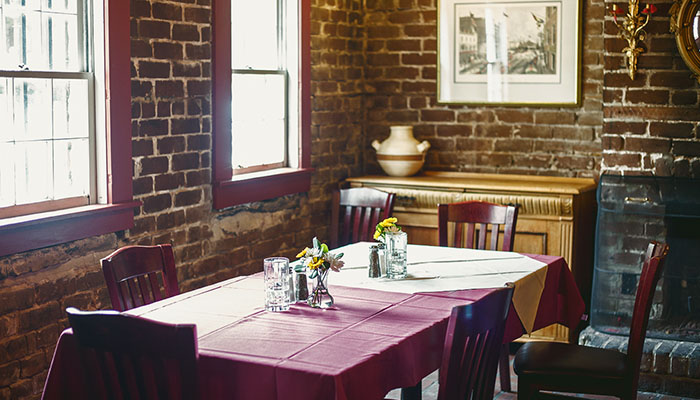 17Hundred90 lies just off Columbia Square, behind the Owens-Thomas House. It’s named for a time when Savannah was transitioning from a settlement carved out of the Georgia wilderness to a township with a few hundred frame buildings, a mayor and a city council. With the American Revolution behind them, Savannah’s citizens were looking forward to new beginnings.

The 17Hundred90 is owned by a minister and a school teacher, now retired, and is run by their son, Patrick Godley, who oversees every detail. As a family, what do they prioritize most? “Hospitality,” says Godley without hesitation. “In our home, we were taught compassion, a strong work ethic and to treat people the way you want to be treated.” Indeed, 17Hundred90 consistently receives high praise for its lovingly appointed guest quarters and dedicated staff, its exceptional restaurant and friendly bar.

The Inn’s 14 rooms — each totally unique feature — modern amenities like flat-screen TVs, air conditioning and free Wi-fi. But feel steeped in a time long past, with history seeming to stare back from every wall. (Then again, perhaps it’s one of the three spirits that allegedly inhabit the Inn, which is considered among Savannah’s most haunted.)

Also the recipient of much acclaim is 17Hundred90’s restaurant.

It dazzles diners with shrimp, scallops and steak seared to perfection. Its innovative dishes like the exquisitely plated escargot — sautéed in white wine, butter and garlic and served with cherry tomatoes, mushrooms and cream — have claimed many converts.

But the beating heart of 17Hundred90 has to be its tavern. With amber lights casting a warm glow on the 360° heart pine bar, the interior looks like something straight out of Cheers. In fact, as a popular local hangout with both weekend and weekday regulars, it feels like Cheers, too. “17Hundred90 has everything,” Godley says, smiling. “The inn, the restaurant and the bar can stand alone, but together they create the kind of hub you don’t find that much anymore in modern life. It really is something special.”

To keep employees and guests safe, 17Hundred90 is requiring masks and wiping down surfaces throughout the day. Fewer dining tables make for more distance. Reservations and a second seating deter crowding. The restaurant is open daily 5-9 p.m. The tavern is open each day from 3 p.m.-midnight, except on Saturdays, when the fun begins at noon. Don’t miss it!