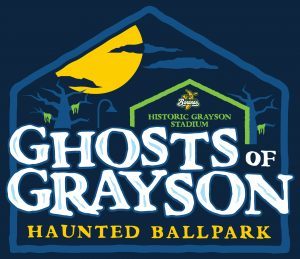 October 25-31: Wicked South Productions presents Ghosts of Grayson Haunted Ballpark. Built almost 100 years ago by General William Grayson, the stadium’s namesake and visionary, General Grayson died in 1941, the same year the stadium was rebuilt. You might even see him trying to complete the ballpark that was never finished. Since his death, the stadium has never been the same. Jackie Robinson, Babe Ruth, Lou Gehrig and hundreds of others all played right here at Grayson Stadium, but did they ever really leave? Legend has it that their spirits still roam the ballpark, haunting visitors after nightfall. Is it true? For more information and tickets, visit thesavannahbananas.com/ghostsofgrayson.