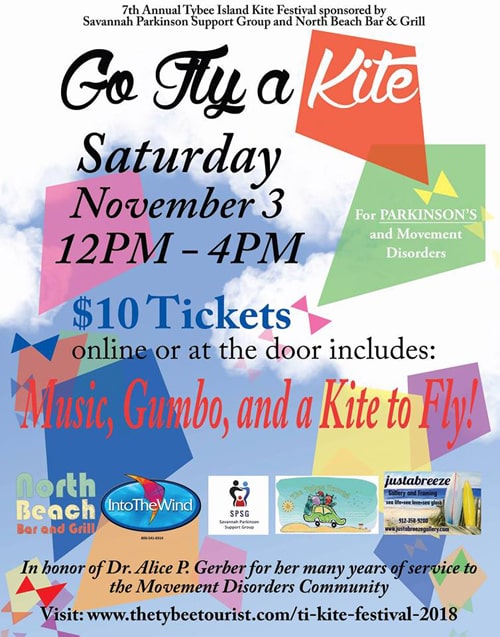 This year’s festival honors Dr. Alice P. Gerber, founder of Savannah Parkinson Support Group.  In 1980, her beloved husband, Marx, was diagnosed with Parkinson disease. After months of searching for assistance and information in and around Savannah, and around the country, Dr. Gerber began the support group.  Dr. Gerber states, “I didn’t want anyone to have to face the problems that Marx and I did.  There was no one in the area to help, no one to talk to about his illness or what we were going through.” From that moment on, Dr. Gerber became a staunch advocate for not just Parkinson disease, but for other movement disorders, as well. She has spent more than 30 years now, championing those who cannot or do not know how to fight for themselves, fighting for services and support in and around the Savannah area.  According to Sarah Bernzott, director of Savannah Parkinson Support Group, “No doubt, everything that has happened in Savannah related to Parkinson disease and movement disorders has been touched by Dr. Gerber’s hands, one way or another.  She is, and has been, a fierce advocate for Parkinson disease.”Delta Kites and a cup of North Beach Grill’s famous gumbo will be available for a $10 donation.  SPSG encourages everyone to come out and fly a kite in honor or in memory of someone they love(d) who has been touched by Parkinson disease or another movement disorder.   “Though April is Parkinson Awareness Month, October is much more manageable for those in our area with PD, or other movement disorders.  Crowds on Tybee Island are not quite as large as they are in April, so parking and moving around is a quite a bit easier. The weather is a little cooler too, allowing them to spend more time outside, participating in the event. “ Sarah Bernzott continues, “We look forward to flying kites for ourselves, friends, and loved ones. The kites, flying in the air, serve as a visual memory of the people in the Savannah area that have been and are touched by these debilitating diseases and disorders.”In addition to family fun, take a few minutes to wander through the booths, learning about a variety of movement disorders, such as Parkinson disease, Multiple Sclerosis, and Essential Tremor. According to the Parkinson’s Disease Foundation, movement disorders affect more than 40 million Americans. These diseases are chronic, painful and debilitating, often leaving the person affected without the ability to control his/her movements. Area businesses that support those with movement disorders, as well as area organizations and support groups will be available to provide information.