Since Savannah’s inception in 1733, the Southern belle has embraced an array of faiths and denominations as well as the houses of worship erected in their honor. Any Savannah itinerary should include at least one of these historic, charming churches, whether you are dropping in for a week, weekend or just a few hours! 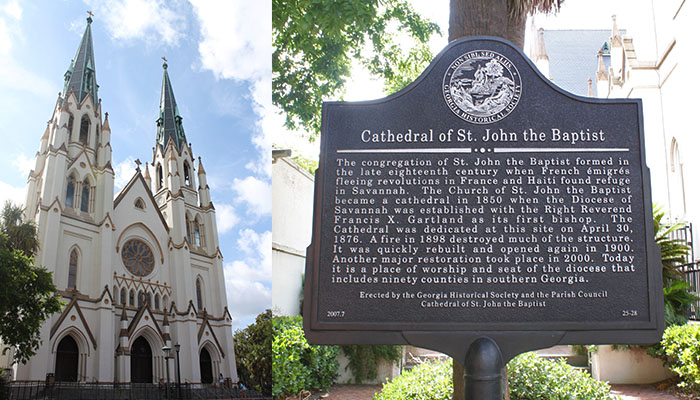 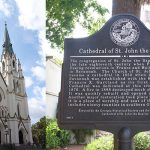 1. The Cathedral of St. John the Baptist

The skyline of Savannah would not be complete without the two white and turquoise spires of the Cathedral of St. John the Baptist. A high priority on any visitor’s scheduled Savannah sites, this magnificently restored cathedral was originally dedicated on its current site in April of 1876. Pope Pius IX created the Diocese of Savannah in 1850, and at the time of the Cathedral’s dedication, it was the only Catholic church in the city. Its signature French gothic architectural style and stunning stain-glass windows (50 in all) explain why it consistently ranks as one of the top 10 historic sites to visit in the Coastal Empire. 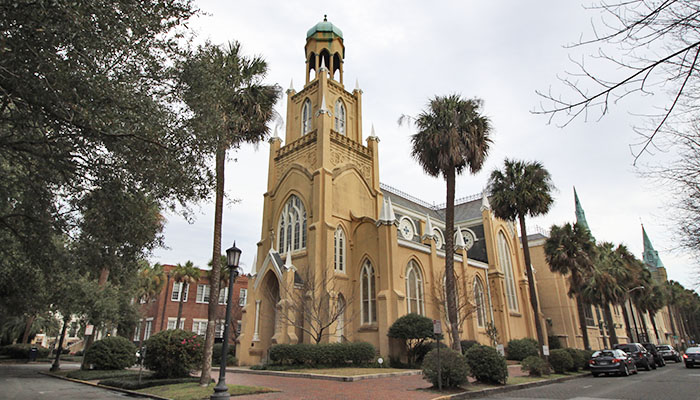 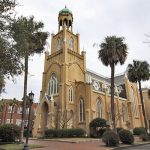 Savannah is home to the lone, truly Gothic revival synagogue in the U.S., the astonishing Temple Mickve Israel. Also the holder of an original 15th-century Torah, the Temple was founded by a group of Sephardic Jews who came to Savannah shortly after General Oglethorpe. The Temple, designed by Henry G. Harrison and consecrated in 1878, was given a perpetual charter courtesy of Governor Edward Telfair in 1790. Today, the Temple represents the third-oldest Jewish congregation in the United States. Inside is the Temple Mickve Israel’s Museum, which preserves early and recent documents and artifacts connected to Jewish life in Savannah and the state of Georgia. 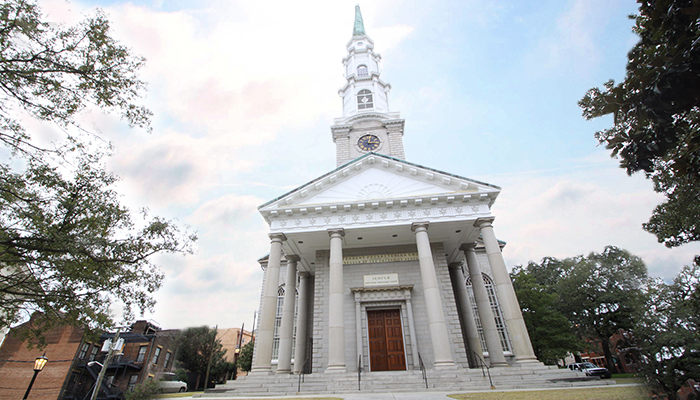 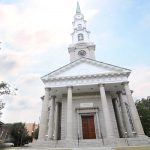 Parishioners and locals refer to the English restoration style church at the corner of Bull Street and Oglethorpe Avenue as Savannah’s Independent Presbyterian Church. Others know it simply as “the Forrest Gump church.” Its famous steeple serves as a backdrop in the film’s opening credits. However you wish to identify it, you should know it is considered the mother church of Georgia’s Presbyterians. Organized in 1755, the church was designed and built by Rhode Island architect, John Holden Greene, in 1817. Its noteworthy pieces of granite came from quarries in Quincy, Massachusetts. 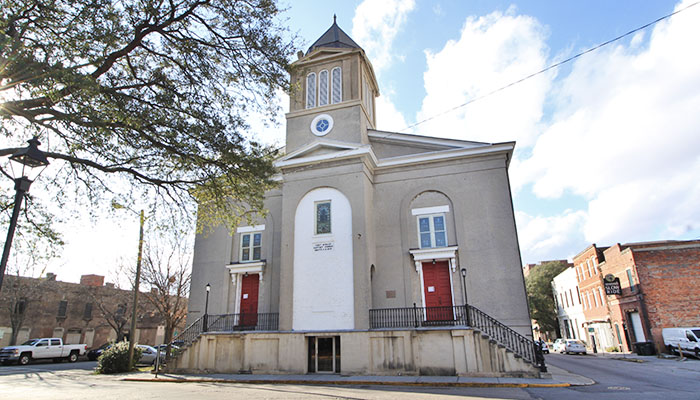 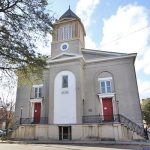 Each of Savannah’s historic places of worship exhibits a unique and unduplicatable backstory. The First African Baptist Church houses a truly incredible past. Thought to be the oldest African-American congregation in the United States, the church served as a stop along the Underground Railroad, though no records remain of how many slaves utilized the church during their journey. The congregation was founded in 1733 under Reverend George Leile, and the building, located on Franklin Square, was completed in 1859. 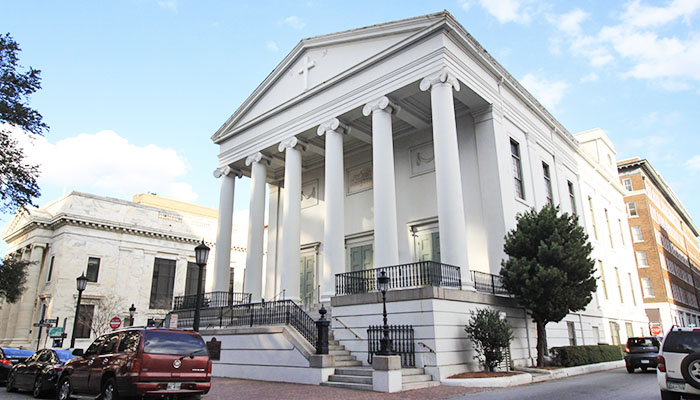 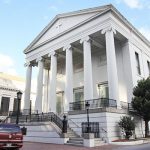 Here’s a nifty piece of Savannah trivia: The current location for Christ Church was set aside by General James Oglethorpe to be used for the colony’s first church. The founder of Methodism, John Wesley, served and preached in the church’s earliest years, from 1736-1737. Within this splendid example of Greek revival architecture, Mr. Wesley hosted the first Sunday School class in North America. The physical church, located on Chippewa Square, was designed by James Hamilton Couper, a St. Simons Island planter and scholar. To this day, the church’s white Corinthian columns distinguish its place in historic Savannah structures. 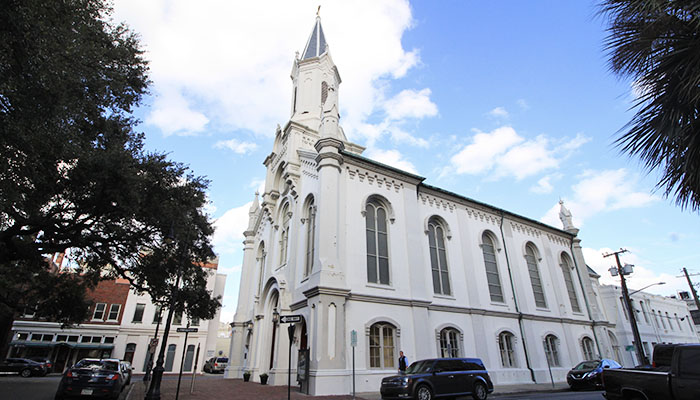 6. Lutheran Church of the Ascension

Next door to the Chatham County Commissioners building and right on the edge of Wright Square, the Lutheran Church of the Ascension stands as a rare example of combined Norman and Gothic architecture. A tiny group of Lutherans docked in Savannah almost a year after General Oglethorpe and established their church about seven years later, in 1741. During the Civil War, the church’s pew cushions were used as beds for the sick and wounded. The church’s design by George B. Clarke features breathtaking stained glass windows depicting scenes from the life of Christ, including the must-see Ascension Window, added in 1878. Walk down the aisle to view a marble altar detailing Leonardo da Vinci’s “The Last Supper.” 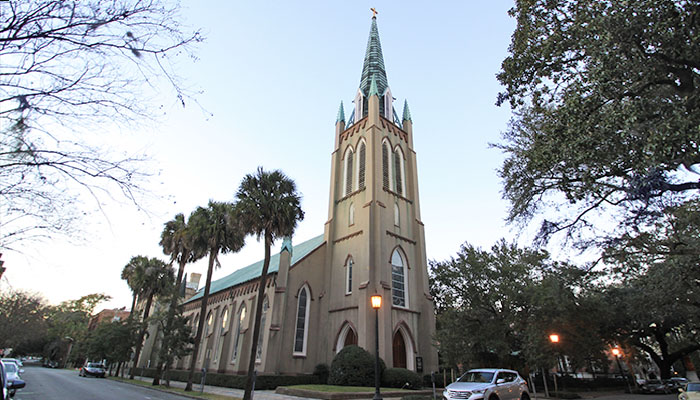 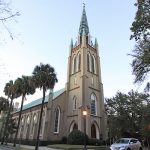 Should you need to know the time while wandering through Madison Square, simply wait for the euphonic bells of Saint John’s Episcopal Church. Its chimes ring out on the hour every day of the week, and their sound alone is enough to encourage further exploration of this neo-Gothic treasure. Constructed between 1852-1853, the church, designed by Calvin Otis, recalls the aura of a British parish house. The church has witnessed several notable figures in American history pass its bell tower, including General Sherman during his occupation of Savannah. The church acquired the Green-Meldrim House, Sherman’s headquarters during the war, in 1942. Today, the beautifully restored home serves as the church’s parish house. 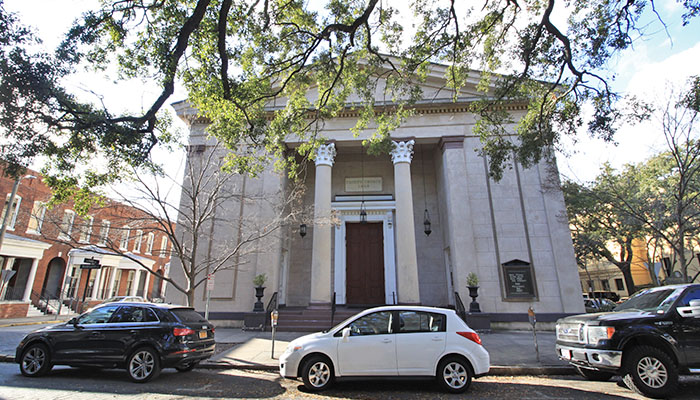 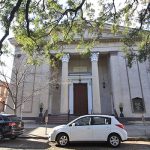 Remember the founder of Methodism, John Wesley, from Christ Church? His congregation is also responsible for the construction of the Trinity Methodist Church on Telfair Square in 1848. Today, Trinity Methodist, designed by John B. Hogg, is the oldest Methodist church in Savannah and welcomes folks from all walks of life through its brown doors. Hogg built the church out of Savannah gray brick in the Greek Revival style, and the sanctuary is a wonderful model of classic Corinthian architecture. 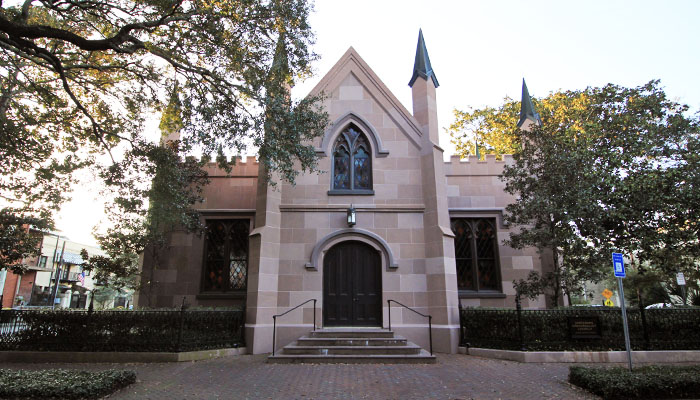 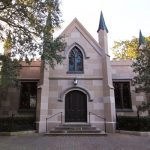 Not far from the Cathedral of St. John the Baptist is the Unitarian Universalist Church, discernible by its Gothic style and castle-esque features. The church, designed by John Norris, was originally located on Oglethorpe Square when it was completed in 1851. The church closed prior to the Civil War, but freed slaves purchased the church before moving it to its current site in Troup Square. An early minister of the church, Reverend John Pierpont Jr., served at the church with his brother, James Pierpont, who was the parish organist and choir director. Savannah legend states James wrote and composed the song recognized today as “Jingle Bells.” 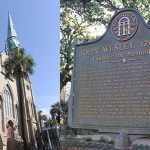 At this point, you might say John Wesley is a legend in Savannah’s Methodist community. Built in 1868, the Wesley Monumental Church features dazzling Gothic Revival architecture inspired by the Queen’s Kirk in Amsterdam, Holland. The church also honors both John and his brother, Charles, who, like Unitarian Universalist Church’s James Pierpont, left his mark on the world with now-famous seasonal songs. Next time you hear “Hark! The Herald Angels Sing,” thank Charles Wesley. During his lifetime, he drafted the lyrics to over 6,000 Christian hymns. Don’t miss the church’s famous, “Wesley Window,” which features the busts of the Wesley brothers and faces the pulpit from the rear balcony.